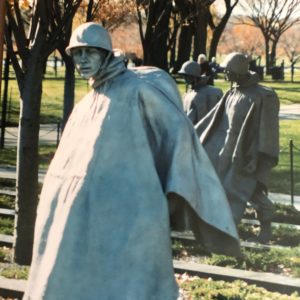 Why Bother To Commemorate?

It is Memorial Day weekend and for many it is a three day weekend as well as the unofficial beginning of summer. So, it is no wonder that our town is filled to the brim with tourists. They stroll along the main avenue window shopping and fill our pubs and restaurants. Our streets are clogged with cars carrying kayaks strapped to their rooftops and campers pulling trailers with four wheelers. In essence, our town is busy. But the pleasures of a fun filled weekend would never be possible without those brave men and women who willingly surrendered their lives on our behalf.

Some time ago, I visited our nation’s capital. Climbing the stairs from the subway, I stood on a busy street corner and paused, overwhelmed with more emotion than I’d anticipated. Washington D.C. is an old city filled with the history of this nation and while there, the events I’d only read about in books, presented themselves in ways more realistic to me than I’d ever imagined.

I viewed the Declaration of Independence, The Constitution, and The Bill of Rights at the National Archives Museum. I stood outside the Ford Theater, where President Lincoln was shot and then looked in at the Petersen House where he’d lain until his death. I visited his memorial at the Washington Mall and gazed at his dignified statue.

I wandered along the length of the granite wall with the 58,000 names of Vietnam Veterans etched into it and then stood still among the Korean War Veterans Memorial. The statues felt eerily alive.

Arlington National Cemetery, 600 or more acres, is the resting ground for American warriors dating as far back as the Civil War. Like fields of grain on the prairie, my only view were the rows upon rows of white and gray headstones.  At The Tomb of the Unknown Soldier, I watched in somber silence as an impeccably dressed soldier walked the 21 precise steps back and forth in front of the tomb.

Moving freely among these historical markers of our country’s history left me with a humble and grateful heart. Elmer Davis, a news broadcaster, writer and director of war information during the second World War said, “This nation will remain the land of the free only so long as it is the home of the brave.”

Why bother to commemorate? The men and women who bravely surrendered their lives on our behalf are worth remembering. Without them, we would not have the liberty to enjoy the freedom of our three day weekend.