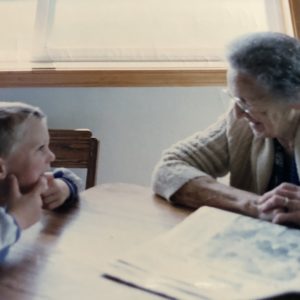 Why Bother Living An Example?

For the first eight years of my life, I had the good fortune of living near my grandma. Memorable holiday meals took place in her large house and uncles, aunts, and cousins sat shoulder to shoulder around the dinner table. Tender roast beef, smooth brown gravy, fluffy mashed potatoes and an assortment of cream pies for dessert delighted my taste buds and filled my belly. It was never a chore for me to clean up my plate at Grandma’s house.

And these occasions never looked like they were a chore for Grandma. She joined in with the cacophony of laughter and chatter around the table during the meal and later, while cleaning up the dishes, more intimate conversations ensued between her and whoever got the privilege of helping her clean the kitchen.

Grandma was used to cooking for large crowds. She grew up as the eldest on a farm in Western Nebraska. The noise around the dinner table would have been common. With fifteen siblings and a smorgasbord of personalities among them, there had to have been incessant chatter and laughter too.

Grandma never balked at the hard work of homemaking. She’d made it her vocation. When her formal education ended after the eighth grade, she worked for the more affluent people in her Western Nebraska community. After she married at age eighteen, she kept her own house in “ship-shape” order. Closets were clean and clutter free, stained laundry was presoaked the night before she washed it, and ironing was done up once a week. Her hardwood floors and furniture sparkled as did her bathtubs and sinks.

She was amiable toward everyone; courtesy clerks at the grocery store, as well as her elderly friends who had grown cranky with age. She treated all sixteen of her grandchildren with equality. No one received any more Kool aid than the other. No one got more than one cookie at a time and we waited for our turn to spend a night at her house.

My family moved away from Grandma when I was eight and the distance between us grew each time my father’s work took our family to another state; from Nebraska to South Dakota and then to Colorado. When illness struck my dad and he required long term care, Mom left some of my siblings with friends in Colorado and returned to Nebraska with my little brother and me, to live with Grandma.

Though a chaotic period in my life, Grandma, now a widow and in her seventies, was exactly the same as I’d remembered her. Her smile, laughter, zeal and set purpose for each day of the week was still intact and for a while, I had the good fortune of living with her. She became the stabilizing factor in my life and living with her became my education in homemaking, fairness and amiability. She is long gone from this world, but  her example for living remains my model.

Why bother living an example? You never know who is observing your life, but it is worth it to live in a way that leaves a good precedent for the one watching you. Your example remains long after you are gone.