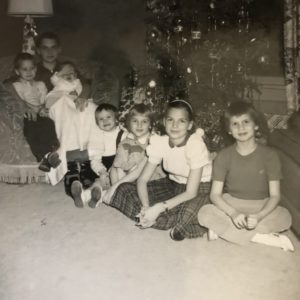 Why Bother Thinking About Birth Order?

If we were not born an only child, then we have an assigned birth order and some would say, a particular personality because of it. This idea may be true, or it may be a fallacy, depending upon whose research you read and believe. From my observational data, I think my order of birth shaped me, but it didn’t necessarily “make” me.

I was born the sixth of seven, the fourth and the final of the girls. By then, my parents were both ten years older than when they first began their parenting adventure. Not only were they older, but also, their resources, such as time and money, were now stretched between six children instead of one.

My oldest brother, the first born, did not necessarily have it made in the shade, but I do know that in portraits of my mother and him, her smile is warm and tender, whereas in later photographs, after more children, she is either not present in the picture or if she is, her face shows a strained, almost forced smile.  In this case, the “more” did not necessarily make her a merrier mother. I think it is safe to say that the  first born in the family does get the fresher, younger side of their parents as well as a larger portion of their attention.

The middle child in our family likes to say that she is the most normal one of all of us. She supports her case by saying how she had to learn to either play with either those who were older or those who were younger. But actually, I think she lucked out. Her God-parents, who were quite wealthy doted over her. They treated her like a little queen. She had more new clothes than anyone else in the family!

Then comes the youngest, the last born, my little brother. I do not hold a grudge against him, but he was born on my third birthday. In essence, when he came along, he took two things away from me, my birthday and my place as the youngest. But, I do not resent him.

The last born child are sometimes known as the one who never quite grows up. Older siblings sometimes speak on their behalf and care for them long after they are capable of caring for themselves. Sometimes, the youngest child actually gets the same focused attention as the eldest child. My little brother tells the story of how after the rest of us went off to school in the mornings, Mom held him on her lap for hours at a time and read book after book to him. I suppose he got cookies and milk too. But like I said, I hold no grudges.

Why bother thinking about birth order? It is worth it to think about how our personalities were shaped by our family of origin. Yet, no matter where we happen to rank, we still have the power to, “Make it a great day,” as my oldest brother would say.