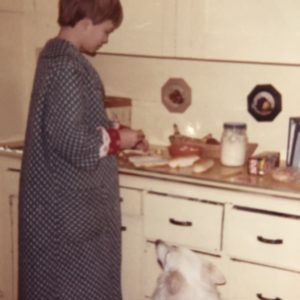 I don’t hate dogs, I just don’t care to share my space with them. Two out of three of my friends own dogs, as well as two out of three of my sons, so I practically stand alone with my opinion. Thankfully, my friends do not hold this particular preference of mine against me. My sons just don’t bring up the subject in my presence. No one ever asks me to house sit their pet, and I do not hold that against anyone.

It is true that I grew up around dogs. My dad loved them, my mom tolerated them. The first one, Bubbles was a collie and spitz and all white. She used to watch me make lunches for my siblings and me, hoping I’d toss her a piece of baloney. She also rode on the hood of our car, sitting between my brother and me as Dad drove slowly down county roads as Dad would do on Saturday afternoons. On one of those times, she leapt off the hood to chase after something and died. I’d never seen my dad cry before that.

When my husband and I got together he bought a large black lab and named him Tucker. Whenever Tucker met up with his brother Strider, owned by my sister, they’d run off into the woods and be gone for days, only to return with their muzzles full of porcupine quills.

After Tucker, we had Buck and then after our oldest son was born, someone gave us a beautiful black lab and we named her Maggie. Maggie did well as long as we lived in the country, but when we moved into town, it pained her and us, to keep her tied up. We had to give her away.

Then we were dogless for a few years and I was okay with that. We had children to raise. Our middle son asked for a goldfish for one of his birthdays and I complied. He named his goldfish George. I replaced George often since the lifespan of a goldfish is short. But every new fish was still George.

When our youngest son was about eight, I had a crazy idea for a Christmas present for him; a dog. He could not get enough of the neighbor’s dog and I thought I could handle having a dog around. It was truly a Hallmark moment when he opened the box and found Jack, his new puppy inside. The Hallmark moment lasted for a very short while.

Jack was untrainable and disobedient. Truly I’d never been around a dumber dog. He’d snap his chain and drag it behind him as he wandered the neighborhood. Nothing held that dog.

One Thanksgiving morning he went missing and when I spotted a dog trotting up the street with a large packaged turkey in its mouth, and a length of broken chain dragging behind him, I screamed, “Get that dog inside.” Someone was missing a turkey, but I was not about to go from door to door to inquire.

The most surprising thing about Jack was he didn’t seem to have an expiration date. When our son left home at eighteen, Jack was still alive. Our oldest son came to the rescue, and adopted Jack taking him into his home.

Since Jack left, more than ten years ago, my husband and I have settled into a mostly dogless lifestyle. We don’t own one, but sometimes one accompanies our youngest son, who still loves dogs, when he comes to visit.

I know my stance of doglessness rubs some people the wrong way, but really, I’ve never met a dog whose breath smells fresh, whose hair doesn’t fall out and who is content not to bark just to hear their own bark. Beside that they whine, nudge their nose into my crotch and are not cheap to keep.

My husband is still fond of dogs. He actually pets them when we visit our oldest son. My daughter-in-law picked up on this and suggested that we get a dog for my husband.

I’ve assured her that when I am gone, she can find him a dog, one that replaces my whining, shedding and bad breath. In the meantime, why bother remaining dogless? So far the clean house and poop free yard is worth it.