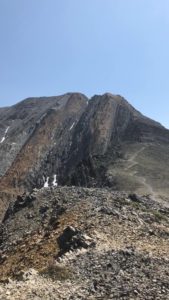 Why Bother to Coddiwomple?

A friend recently shared a new word with me, coddiwomple. I’d never heard of it, and hearing her say it made me laugh. I looked for it in my dictionaries and couldn’t find it, but I did a little bit of research and discovered that it is most likely an English slang word. Long distance hikers and other adventurers use it most often associating its meaning with the idea of traveling in a purposeful manner toward a vague destination.

In a way, I coddiwomple my way through most every day. But since I want to respect this fairly new word and how it’s used by travelers and adventurers, I will stick to its original usage as best I can.

Last summer, my husband and I did some coddiwompling around the southern part of Idaho. We’d planned a few adventures; rafting the Payette River, camping in Stanley and climbing Mt. Borah. It was the climb up Mt. Borah, Idaho’s tallest peak, 12,662, that I believe came the closest to the purest form of coddiwompling.

About eight months prior to our trip, my husband had foot surgery that corrected something wonkey in his big toe. (Wonkey is a word I learned while spending time with some Canadians. It means something out of whack.) The surgery was successful, but recuperation took longer than expected. By the time we left on our trip, his toe was still tender, and not yet completely healed. But, he felt no pain while we rafted the Payette and when we set up our campsite in the Sawtooth Mountains, all went well. But the morning we drove to the base of Borah I heard doubt creeping into his voice.

“I’m really not sure how far I’ll be able to walk,” he told me as we locked the car and slung our day packs onto our backs.”

“I will be happy with whatever distance we can cover,” I said, trying to believe these words for myself. Of all the adventures we’d planned that summer, hiking Borah was at the top of my list. Though I am not one who likes turning back on a trail without completing it, I knew I could not push my husband to walk all the way to the peak if his toe would not hold up under the strain.

So, I set my purpose; to be content with however far we’d get on this adventure. In other words, I would coddiwomple.

Borah is a steep climb, gaining 5,000 feet in four miles and it was the tallest peak we’d ever attempted. My husband led the way setting a comfortable pace and I followed enjoying every switch back we completed. The higher we climbed the more beautiful the view and the happier I became. We were covering much more ground than I’d anticipated.

Eventually, the trail turned into a rocky path as we rose above the tree line. My delight was mixed with a little fear at the steep drops on either side, but we kept on. Then the wind picked up and the day turned cooler. Clouds began rolling in and a storm brewed around us. Sheltering ourselves from the wind, we opened our packs and munched down a quick lunch.

“I think this is about as far as I can go,” my husband told me.

I gave him a kiss and a smile, “This was amazing to have made it this far.” And I didn’t have to convince myself of the words. We’d made it much farther than I’d expected.

Why bother to coddiwomple? Well it is worth it to set a purpose but part company with your expectation. You might go further than you think. 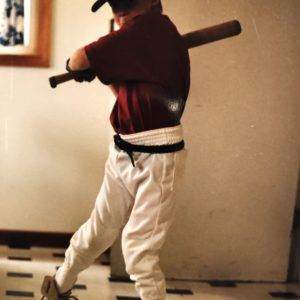 Why Bother to Recant?

I grew up watching the Ed Sullivan show on Sunday nights in the living room with my family. The June Taylor Dancers amazed me and when the Beatles made their debut, my dad commented on the length of their long hair.

But something we never watched was sports. I didn’t know football, baseball, golf, basketball, or boxing were televised events until I married my husband.

At first, we did not own a television or any other electrical appliance. We’d built a little house in the woods, gradually adding modern conveniences; a phone, plumbing and electricity.  Then we bought a used T.V. and VCR to watch movies.

In the course of time though, we moved to a house in town and suddenly, the television took center stage in our living room. Who knew the difference between the NFL, NBA, MLB, NCAAF, MMA,  NCAA and boxing? Who followed the World Series? Who cared? My husband.

On Sunday afternoons and weekday evenings, his attention appeared to be riveted to a boxing ring, football stadium or basketball court. I began to feel excluded and miffed.

I tried to take interest and watched the Super Bowl.  I tried to converse about the playoffs. But overall, I lacked any connection to it. I couldn’t see the point or understand the rules.

Watching sports, I surmised, was a distraction and unhealthy pastime for our young family. It took away from evenings of reading, or after dinner walks and talks. I stated my case to my husband, but he did not see things my way. My mood went from bad to worse.

It would take a drastic measure for me to get my point across to him, I thought one evening walking by myself through our neighborhood while noticing the blue glow of the television through the windows of other houses.  Simply unplugging the damn thing would do nothing. Smashing it with a hammer would make a mess. The next morning, it dawned on me, I’ll remove it.

While my young sons slumbered in their beds and my husband drove to work, I called a friend who owned a large Quonset hut and asked if I could store our television there for a while.

Exhilarated with my great idea, I unplugged the box and carried it out to my car. Luckily, it fit in the trunk. Not until leaving it at my friend’s and driving back home did I consider my actions. Was this too radical of a move? My sons thought so.

When I got home and served them breakfast, they talked about the empty space in the living room.

“How will we watch the World Series?” The oldest asked.

“I don’t think Dad will be very happy about this,” commented the middle son.

All three were right. The first night without the television, the tense atmosphere around the dinner table made swallowing the meatloaf and mashed potatoes difficult and as if someone had pressed the mute button, no one said a word.

A few days passed before a conversation took place between my husband and me.

“I get your point,” he acknowledged.

“Following sports is just one of the things I like to do.”

Why bother to recant? It may be worth it. It could open a channel for change.