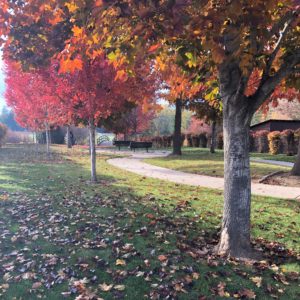 Recently, while taking a walk in the park with my camera trying to capture the beauty of the fall colors, I noticed an artist and stopped to admire his work. He was also trying to catch the beauty, but with a paintbrush and canvas instead of a camera. I stood under the canopy of red and orange leaves and looked at the outline of a tree on his canvas. Wishing I had his talent, I struck up a conversation with him.

He told me he’d grown up as a native and graduated from the local high school. It had been about ten years since he’d done much drawing or painting. I told him I worked as an elementary school teacher and had lived in the neighborhood for about thirty years. He smiled to himself and then related to me what kind of a student he’d been while in school. “I was like a vegetarian wolf,” he told me. “I did not fit in.”

I told the artist I had a few vegetarian wolves in my classroom and then thought about how those kids might feel. I know as a teacher, they force me to stretch and grow. Since they are unlike the rest of the class, I have to come up with different strategies to teach them. They take a bit more of my energy, but I appreciate them just as much if not more than the “carnivore wolves.” And somehow, we all have to learn to get along with each other.

The next day, I returned to the park to capture some more of the beauty of the fall season and again I saw the artist. The tree outline on his canvas had taken on more detail, but still no leaves had appeared on his tree. I worried the weather might turn cold and wet before he got the colors onto his canvas. He told me one of his downfalls was control. He wanted to get the tree trunk and branches just right before he added the color. But he said, at some point he had to let go of his commanding desire for perfection, and just let the art happen. I had to admit his words hit home with me. I often try to control and when I do, I have to remind myself to allow things to unfold in their time and in their way. I don’t know if I will ever see this stranger again, but in talking with him, I was given a fresh perspective on some old ideas.

Why bother talking with strangers? Striking up a conversation with people we do not know may show us a fresh way of looking at the old.