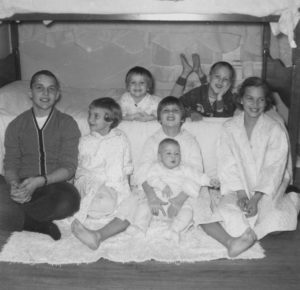 Why bother getting along?

After a girlhood spat with one of my sisters, my mother once told me, “If you can’t learn to get along with your own brothers and sisters, you’ll never get along with anybody else.”

But it made more sense to my pubescent mind that the offender apologize rather than for me to learn how to get along with them. But I’ve since come to realize the wisdom my mom tried to convey; to get along with someone, you have to get to know them.

I didn’t bother getting to know my brothers and sisters while growing up. They were older, and leaving home to start their own lives while I was still trying to figure out mine. But as we developed our own families and careers we also began connecting as adults.

My six siblings, though unique, portray universal traits too. There is the  cynic, the eccentric, the peacemaker, the professional, the soft hearted and the broad minded. Though I try to treat them all “equally,” I do have my preferences.

Through the family grapevine, I heard that my oldest sister’s depression was growing more serious and debilitating. Though not one of my “preferred” sisters, I called her and listened while she told me about her “Black Dog,” the term she used for her depression.

I thought back to when she was in high school and how she’d played the part of Emily in Thorton Wilder’s play, Our Town. I recalled the times she’d come home to visit from nursing school, knock on the front door dressed as an old bag lady to make Mom laugh. Maybe the “Black Dog” was just something theatrical.

But it wasn’t. Her melancholy grew worse. Medication, counseling and other treatments helped temporarily, but the “Black Dog” never went away.

Then, one year when she came to visit, I invited her out for coffee. I wanted to understand her depression instead of continuing to assume.

“Only if I can be earnest,” she answered, throwing her head back and laughing.

I shook my head taking a minute to get her joke.

“I’m sorry, Terese, it was just such a good line.”

Then she listened while I expressed my desire to know her better and I listened as she described the “Black Dog” to me.

Now, she calls me Ernest and I call her Frank. The “Black Dog” still visits her and will most likely never go away. Getting to know Ernest better, I’ve discovered how brave and courageous she is. She stays alive when her depression makes her think she’d be better off dead.

Why bother getting along? It is never too late to listen as though you are getting to know someone for the very first time. Because maybe you are.