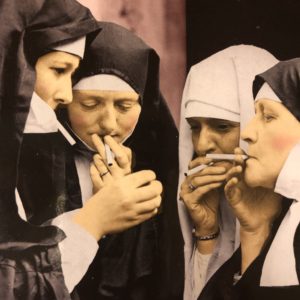 Why Bother To Quit Smoking?

Recently, I had a conversation with some of my siblings during our weekly conference call and I asked the question, “What is a habit you’ve given up, and what did you replace it with?”

We’d all given up smoking and put into place another routine; running, walking, biking or some other such addictive, but healthier behavior.

But I grew up with the smell of smoke in the air. The blue haze seen hovering above the heads of patrons in a restaurant was not an uncommon sight in the 1960s. Every male actor and some of the female actors on television and in the movies talked with a cigarette just barely hanging on their lips. Smoking had to be good if everyone was doing it.

All the adult males in my life smoked, whether cigars, a pipe, Winston, or Salem cigarettes.  My dad would casually leave the dirty kitchen and the cacophony of his family after dinner, and head for the front porch. Since I was too young to be missed by anyone, I’d follow him out the door.

On the front porch swing he’d set me on his lap, light a cigarette and when he exhaled that straight line of smoke through his lips, I knew all was well. I could see by his relaxed expression that he enjoyed what a cigarette brought into his world; peace and quiet. It signaled the end of a busy day, and the letting go of whatever load he carried on his shoulders. I loved the smell of smoke or was it that I loved being alone with my dad?

All of my siblings, older than me, started smoking at various ages. But for them it was not necessarily a relaxing pastime. For them it was a secret to be kept from Mom and Dad. They smoked in the garage attic or opened their bedroom window and blew their smoke out into the night air, always on edge of being found out.

I bought my first pack when I was twelve. It was scary. I walked into a gas station with three quarters in my sweaty hand and plugged them into the cigarette machine. I pulled the lever and swooped up the package of  Marlboros before the attendant, pumping gas for a customer, could come back inside. Then I sat down in a park and smoked my first cigarette. It was not love at first inhale, but the smell reminded me of my dad.

At first, I smoked alone or with one girlfriend. We’d blow our smoke out her bedroom window when I’d spend the night at her house. Later, in high school, I’d join a huddle that gathered near the back of the building and light up before going inside to class. I tried smoking in the bathroom, but that was a mistake that cost me a visit to the principal’s office.

After high school and moving away from home, I went to bars, sipped beers, listened to live music and smoked with friends around a table. Our single ashtray ran over long before our evening ended.

Eventually though, smoking conflicted with my lifestyle. I’d gotten married and my husband wanted to start a family. I quit my habit, mostly for vanity reasons. Have you ever seen a pregnant woman smoking? To me, it was unsightly, and I did not want to be one of those women. So I quit and frankly, I’m glad I did. Smoking is no longer what it used to be.

Now, a person cannot smoke within twelve feet of any public building. There are no longer  smoking sections in restaurants or on airplanes. In my favorite tap room, smoking is not allowed, but dogs are. Dogs allowed! A confounding concept to someone like me.

Not only are smokers restricted now more than ever, but who can afford the habit? Back when I first started smoking, even a kid could afford to smoke.  Not so today.

Frankly, I’m glad I gave it up. It’s just not the same as it was. Why bother to quit smoking? I think it’s worth it to try to find a less governed and restrictive habit.