Why Bother To Stop Trusting?

To trust means to put our confidence in someone or something because we believe that who or what we’ve trusted has somehow proven to be reliable. We might place our trust in a philosophy we’ve spent time studying, or an idea for living that we think works well, or in a person we think is for us and not against us. But what if our philosophy, ideal way of living or the person we thought was on our side, all proved to be wrong? What if the system, formula, or individual wreaked havoc on our lives instead of benefiting our lives? Would we be willing to stop trusting in what’s no longer working?

Worry used to be a very motivating factor in my life. If I was not worrying, I worried that I should be. Worry, it seemed, prepared me to think ahead about all of the “what ifs,” and then curtail those “what ifs” from hatching into reality.

I vividly remember the first time that I thought worry had magical powers behind it. I was traveling with my dad from Durango, Colorado to Denver. I remember he was going to Denver to attend some kind of meeting, but why I got to go along, I don’t recall.

The winter roads were wet and snow was piled high on either side of the roadway. It was late in the evening and dark. For some reason, I was afraid that my dad might fall asleep while driving and we’d end up in an accident. In my mind I conjured up a formula that would prevent such a thing from happening. If I were to stay awake, the simple act of being vigilant would keep the accident from happening.

Hours later, when we arrived in Denver, I was exhausted, but elated. We were alive, all because I’d worried enough to keep us safe, or so I thought. But from then on, I became a true follower of worry. I believed in its power. Strange but true.

But the older I got, the more worry showed its true colors. It proved to be an awful taskmaster. I could never do enough to silence its voice. Feeling satisfaction about anything was never an option. Worry demanded that I keep my ducks in a row at all times. There were no vacations, no moments of rest, no relaxing allowed.

In addition to working overtime during the day, I also had to make room for worry in my bed at night. I’d often jolt awake, feeling like I couldn’t be caught sleeping too soundly just in case I missed thinking ahead about something.

After believing in worry for nearly a quarter of a century, I concluded it no longer held the magical power I thought it once held. It was only a fictitious tale. No one can  predict or prevent the future, not even all the worry in the world. 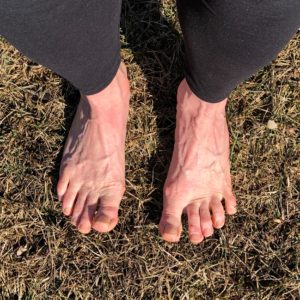 Why Bother Noticing Your Foundation?

Over the course of  the years that my husband has been in the business of building houses, I have visited his various job sites in their different stages of progress. I think the messiest stage of building a house is its foundation, but it is the most necessary part of any building. If the foundation is not level, the rest of the building will not be square. If the foundation is not strong, the walls will not stand. Without a good foundation, the building is doomed.

Your Feet Your Foundation

In yoga classes that I’ve taught, I always start out by having my students stand up and look down at their feet. Then I instruct them to lift all their toes and press the big toe mound down into the mat. Then I’ll ask them to set their toes down, but to distribute their body weight evenly to the inner and outer part of their feet as well as the heels.

As my students direct their attention to their feet, then I also ask them to notice their ankles, knees, legs, hips, back, shoulders, neck and head. Like a tree, we find our stance from the ground up. As our feet set themselves firmly into the ground, then our bodies rise up, erect and strong. It is from this strong stance that we can then begin to move into various poses. When our feet are firm and strong then our movements will be too.

Convictions Hold Up What We Believe

Like a foundation that holds up a house and feet that hold up a body, convictions hold up what we believe. We don’t all believe the same things, but it is important to notice what we do believe.

Are my beliefs true? Are my beliefs strong? Is my position level? Do my principles help me move in the right direction? Do they keep me balanced?  If my convictions do not have a strong foundation, if they are not grounded on something solid, then I won’t be able to stand erect. I’ll falter, waver, and eventually fall down. Without a good foundation, I am doomed.