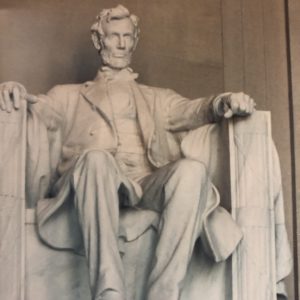 Why Bother Living a Legacy?

Who is someone in your past for whom you are grateful? Who inspired you, left an impression or contributed some morsel of meaningful wisdom to your life? November 1, was All Saints Day, a day set aside by the Christian community recalling those saints, who although dead and gone, are remembered because of how they lived a God-fearing, genuine, kind and earnest life.

I did not visit a cemetery, light any candles or attend a church service to commemorate any particular saints. Instead, I simply ruminated on the virtues of three people, who although  not officially canonized as saints by the church, are none-the-less heroes of faith in my eyes. They remained steady and upright when everything else in the world went topsy turvy and though they walked through dark times, their light continued to shine bright. Remembering them, caused my own little light of hope to glow brighter.

Never having met Abraham Lincoln, I still count him as one of my heroes of faith. In school, I learned a few things about him, and as an adult, I read and discovered even more. Then, some time ago when I visited Washington D.C. and I stood in front of the Lincoln Memorial, mesmerized not only by its immensity, but also because of its significance.

I am sure our sixteenth president never foresaw how his greatness would be remembered by a memorial built in his memory. He was too humble to think of himself as anyone grand. Instead, he lived in an honorable way. In reading one of the many books written about Abraham Lincoln’s life, I came across this quote, “I am not bound to win, but I am bound to be true. I am not bound to succeed, but I am bound to live up to what light I have.” He did successfully win the Civil War keeping the United States united, but more importantly, he lived up to the light he possessed.  As a result, his life is a legacy worth remembering.

The other two people whom I count as heroes of faith are my grandmother and my mother-in-law, both of whom I’ve written about in previous blogs. Though their trials were not as great as President Lincoln’s, their lives not as famous and no immense memorials were ever built in their honor, they too lived up to what light they possessed. In spite of the trials, hardships and afflictions they encountered in their years on earth, their lights did not grow dim. Instead, they maintained their faith, their sense of humor and kindheartedness.

I am sure none of my heroes of faith lived in order to leave a legacy, they simply lived their lives in a truthful and honorable way and in so doing, left a life worth remembering.

Why bother living a legacy. It is worth living a legacy so when we are dead and gone, our lives, along with the light we bore, will be of inspiration to those who are trying to live God-fearing, genuine and kindhearted lives.