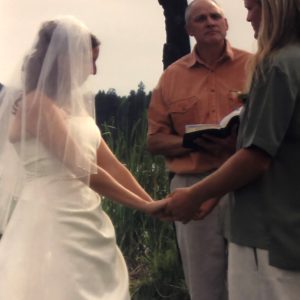 Why Bother Being Grateful for a Daughter-in-Law?

Twelve years ago, when our oldest son called to tell us that he’d proposed to his girlfriend, Meagan, I was elated and frightened at the same time. I was glad he’d made the choice to marry, but becoming a mother-in-law scared me. Having never been one, I wasn’t sure what was expected of my role.

Then, about a month before the big event, Meagan invited me to join her and some friends to go shopping for her wedding dress. Though driving to the city to shop is not my favorite thing to do, I reasoned that spending time with Meagan would help me to get to know her, so I accepted the offer.

I lost count of the number of bridal shops we visited on that hot day in June. No matter which store we entered, the merchandise looked the same to me, white dresses with puffy layers jammed into protective plastic wrapping and hanging wall-to-wall on racks. I admired Meagan’s tenaciousness when I heard her say that she was determined to spend only one day finding her dress. Her face flushed from the heat and effort of stripping out of her jeans and into the cumbersome gowns in the small airless dressing rooms, but she always emerged with a smile on her face.  Faithfully, she modeled each of her choices and awaited our comments. “Too many ruffles,” “Too tight in the hips,” “Too low in the back,” or “Just not you,” were some of the remarks made by the small audience.

I could only smile and nod my head with approval. Whether she chose to wear a contemporary, sophisticated lace or a satin gown, to me she looked lovely and in love.

At the last store on the list, Meagan walked toward us with a confident grin on her face. “This is the one,” she announced. The long, white, glamorous, strapless, satin gown hugged her tiny waist and billowed out into two long layers. As I looked at my future daughter-in-law dressed in wedding regalia with bare feet, unexpected sentimental tears slipped down my cheeks.

Thirty years had passed since I’d married the man I’d fallen in love with. But, before we married, protocol entailed meeting his mom, Berniece.

Back then, I had been a college student with a professional career in mind and Berniece was everything that I was not; a homemaker, a gardener, a good cook, confident in her own skin and possessing a sense of humor. But, I only saw an abyss between someone so unlike myself. Yet, it was Berniece’s resolve to welcome me into the family.

While gazing at Meagan and reflecting on the days of my youthful love, it dawned on me how Berniece’s good-nature, her few words of criticism, and acceptance put me at ease.  She was honest, and transparent, so I never had to guess at hidden motives. Although our paths had crossed because I married her son, her presence became an ordinary and welcomed part of my life.